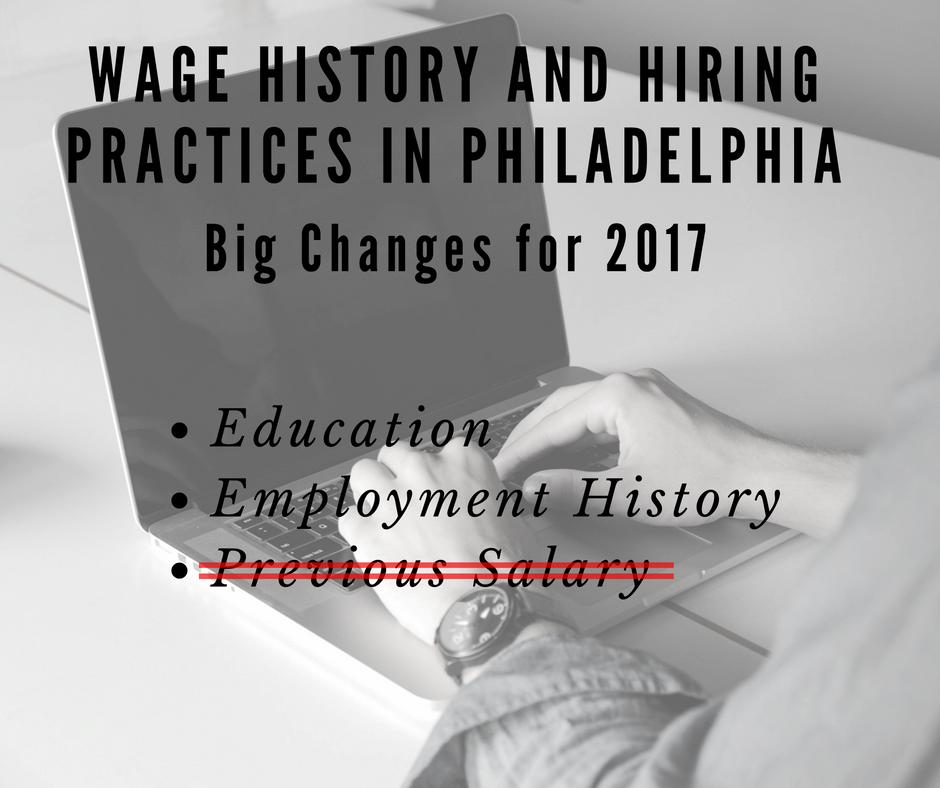 Philadelphia City Council passed a Bill earlier this month that will soon make it illegal for any employer to ask a job applicant about his or her wage history.  This law will go into effect 120 days after it is signed by Mayor Kenney.  A spokesman from the Mayor’s office stated that the Mayor intends to sign the Bill into law shortly so we can expect this to be the law in Philadelphia in late March or early April 2017.  Philadelphia officials modeled the Bill after Massachusetts which passed its own wage history ban earlier in the summer.  At the state level, both the Pennsylvania and New Jersey legislatures have similar wage history proposals under consideration, but for now, it looks like the Philadelphia law will go into effect first.

The primary purpose behind the Bill is to address the gender wage gap.  According to the United States Census Bureau 2015, in Pennsylvania woman are paid 79 cents for every dollar a man makes.  woman of color are paid even less.  It is not uncommon for an employer to base a salary on what you were making at your previous job.  Therefore, basing an employee’s wage upon what she earned at a previous employer only serves to perpetuate the gender wage gap.   This Bill stresses that wages should be based upon job responsibilities and an applicant’s or employee’s qualifications.

In Philadelphia, it will soon be illegal for any employer “to inquire” about an applicant’s wage history at any point of the hiring process.  “To inquire” will be broadly construed and includes both verbal and written inquires into wage or salary history.  Furthermore, “wages” will also be broadly construed to include all earnings of an employee regardless of how it is determined.  Whether an employee was paid by the hour, task, commission or other method of calculation is irrelevant and asking an applicant will constitute an unlawful employment practice.   Asking about fringe benefits is also off limits and thus needs to be avoided.

Failure to abide by the new law will have consequences.  The Philadelphia Human Relations Commission (PHRC), for example, has the power to issue injunctive relief to stop unlawful employment practices and direct employers to pay applicant’s compensatory damages and punitive damages of up to $2,000 per violation.  In addition, the PHRC also has the power to award reasonable attorneys’ fees

If you requested an applicant’s wage history before learning about the proposed law goes into effect, do not worry.  A careful reading of the law reveals that it is only improper to inquire about an applicant’s wages after the law goes into effect in mid March April next year (2017).  So if you already have this information in your possession you did not commit a unlawful employment practice within the meaning of the law.  However, this does not end the inquiry.  So long as you the employer do not use this information in any manner after the law goes into effect there will be no liability under this law.  As a practical matter this means that employers should have a memo to all personnel connected with the hiring process not to take into account past wage history when formulating an offer.  Going one step further, employers should consider examining what other individuals within your business are paid so that you can base your wage offered on something other than the applicant’s previous salary.  Finally, perhaps it might be best and in the spirit of the new law to go outside your company and see what other are paying similarly qualified employees.  Perhaps, while not intentional, you are paying woman less than what their male counterparts are receiving on a dollar for dollar basis.

As of this post, there is an approximately 4 month window for employers to get their house in order and update hiring procedures.  While not exhaustive, employers should examine the following areas:

This entry is presented for informational purposes only and does not constitute legal advice.