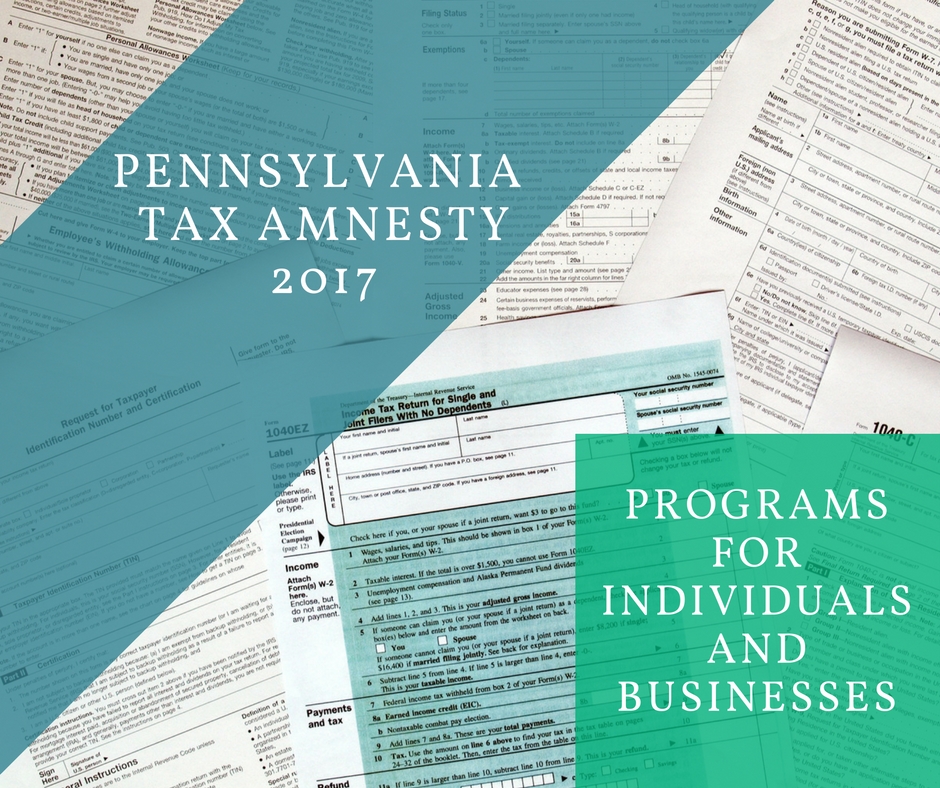 What is the Pennsylvania tax amnesty program?

Tax amnesty  is a program where taxpayers (businesses and individuals) who owe outstanding taxes can settle with the Pennsylvania Department of Revenue (“Department”) by paying less than what is owed.  Under the  program, if the taxpayer pays the entire amount of the outstanding tax due, the Department will waive all penalties and one-half of the interest associated with the underlying tax.  This is an incredible opportunity for taxpayers to settle with the Department and take advantage of the savings being offered.

When does the tax amnesty program take place?

From April 21, 2017 through June 19, 2017, the Department will offer tax amnesty to all eligible taxpayers and waive all penalties and one-half interest if the taxpayer is able to pay the underlying tax and the one-half interest that was assessed.  This is a strictly enforced sixty (60) day window.  There will be no extensions of time to file.  All required returns must be filed by the last day of the deadline.

Who is eligible to participate in the program?

Any taxpayer may generally participate in the program so long as they are not:

What taxes are eligible?

While not an exhaustive list the following taxes are eligible for the program:

When are payments required to be paid?

All payments under the tax program are required to be paid electronically by the close of the sixty day window – June 19, 2017.

What should I do going forward?

The 2017 amnesty is an incredible opportunity for taxpayers to resolve outstanding debts with Pennsylvania.  Going forward, if a taxpayer receives an assessment in the mail for the above tax periods and they are greater than what is being offered by the 2017 amnesty program – don’t settle.  Negotiate a deal that is comparable to the program.  This is an excellent time for taxpayers who might have not filed all of the required returns or perhaps may have under reported income to come to the table and settle up with the Commonwealth.

If you have any questions regarding the 2017 tax amnesty program or any other issue affecting your business, please feel free to call Doug Leavitt and the attorneys at Danziger, Shapiro & Leavitt, P.C.  We are available to assist you with your business needs.  We look forward to hearing from you.

This entry is presented for informational purposes only and is not intended to constitute legal advice.